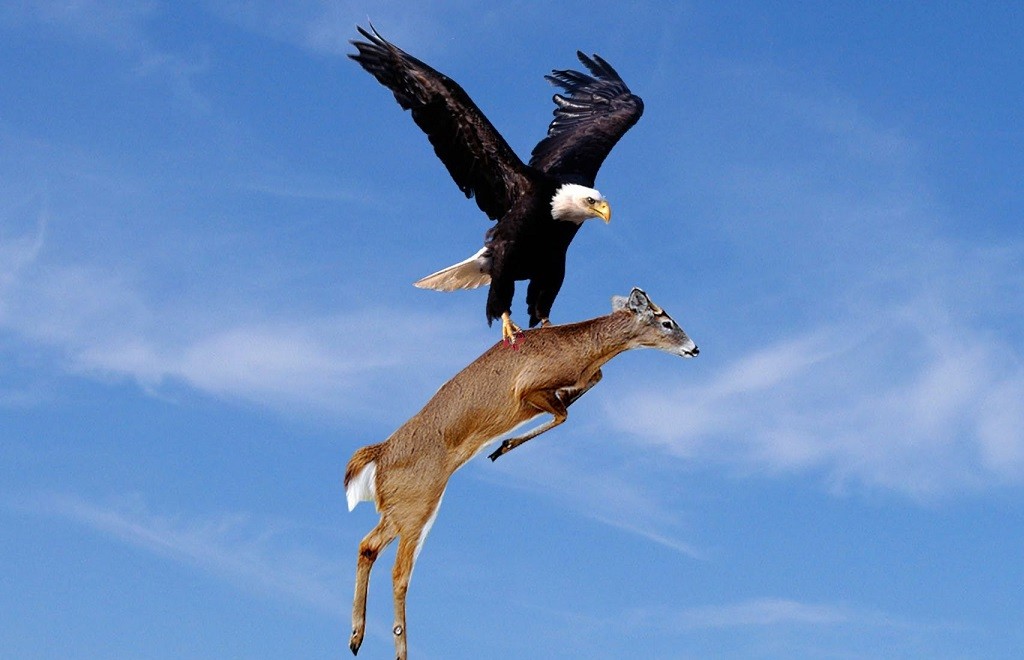 The Eagle is one of the biggest and certainly, the most majestic of all birds. The animal has come to be admired all over the world as a living symbol of power, freedom, and transcendence. Here are 20 interesting Eagle facts you’d be glad to know

1. There are over sixty species of eagles, Accipitridae, most of which are found in Eurasia and Africa. Of the 14 that are found elsewhere, Central/South America has nine, North America just two (the Golden and Bald eagles) and Australia three.

2. The modern word ‘eagle’ was derived by corrupting an original word twice. It was gotten from the Latin word Aquila through the French word Aigle. Aquila was possibly derived from Aquilus meaning dark-colored, or Aquilo meaning north wind.

3. The Bald Eagle – Beloved of North Americans everywhere, declined rapidly as more and more people ‘invaded’ its home since the 18th century. By 1967 it was put on the endangered list with about only 500 pairs thought to exist. However, once protected it picked up again very quickly. It was moved to just ‘threatened’ after 28 years and in 2007, just forty years from the original listing; it was removed from the endangered list entirely. However, it is still protected, along with its Golden cousin.

4. Eagle is one of the largest and most powerful birds of prey – making it an apex predator in the bird world. Even the smallest ones fly faster, more directly and with larger wings than comparably sized birds of other families.

Depending on what you measure by (weight, length or wingspan), the biggest birds are the White-tailed Eagle with a 7 ft 2 in (218.5 cm) wingspan, the Philippine Eagle is 3 ft 3 in (100 cm) long and the Stellar’s Sea Eagle weighing in at 15 lb (6.7 kg). However, if you make a list of the top five for each of these measurements, only one bird appears on all three lists – the Stellar’s Sea Eagle, which has the second largest wingspan at 7 ft (212.5 cm) and is the fourth longest at 3 ft 1 in (95 cm), as well as the heaviest.

5. The South (or Great) Nicobar Serpent Eagle is the smallest eagle at just 1 lb (450 g) in weight and 16 in (40 cm) in length, but it still has no trouble out-flying other birds of similar size! It’s considered ‘near threatened’ by the conservation people as its habitat is slowly disappearing.

6. Eagles hold the record for the largest load known to have been carried by a flying bird – It was by a Bald Eagle, which flew with a 15 lb (6.8kg) mule deer fawn. This is not to say they won’t try to catch larger prey – just that when they do, they’ve got more sense than to try to fly with it! Even the big eagles won’t usually fly with more than 4 or 5 lb catch.

7. The largest known kill by an eagle was a duiker deer weighing 82 lb (37 kg) – which was 7-8 times the weight of the Martial Eagle that killed it!

8. The Bald Eagle, named for its white head on an otherwise brown body is not actually bald – it merely has white feathers there. The description ‘bald’ was applied at a time when it was a common way to describe a white face.

9. Male and female eagles of the same species don’t differ much in appearance, but they are unusual in that the females are the larger, by about a quarter.

10. In line with their proud and arrogant bearing, eagles obviously have confidence levels to match, because all other birds of prey have the habit of glancing over their shoulder before diving for their prey. They do this to be sure another predator isn’t behind them and scheming on making them their lunch. The Eagles don’t worry about this; presumably, nothing is daft enough to consider the idea of having an eagle for dinner.

11. Eagles do not necessarily migrate – They can stay in the place they were born for their whole lives, but will move if food levels and temperatures become too inhospitable in winter. When they do, they do it in a very leisure manner, usually hunting in the morning each day and flying onward in the afternoon when things have warmed up – they can simply ride the warmer wind currents, gliding along with very little effort. On arrival, they rest up for the winter before returning when warmer weather arrives.

12. Prey varies between eagle species – Fish eagles catch a lot of fish and water birds. Birds of open habitats catch almost any medium-sized vertebrate they can find. You won’t need three guesses as to what the Snake and Serpent Eagles prefer to prey on. Some species even target ground or tree-dwelling birds and mammals in woodlands and forests, which must entail some very precise and clever flying.

13. Eagles are creatures of habit and will return to the same nest every year, repairing and adding to it each time. Because of this, the nests tend to become absolutely enormous – up to eight feet wide, fifteen feet tall and weighing around two tons, in the case of one bald eagle nest.

14. Eagles lay between one and three plain white eggs in early spring. The female will do most of the incubating for the 35 days or so they take to hatch, although the male will do his share by bringing food to his mate the rest of the time. 15. Eagle parents are very protective of their chicks. One of them watches over the nest almost always. Eaglets grow phenomenally fast and will weigh around 8 or 9 pounds at six weeks old.

16. Being born an eagle does not give the easiest start in life. The first hatched chick in the nest will get a slight head start on its siblings, and with this small advantage of size, it will attack and victimize the smaller chicks, taking most of the food and often resulting in it becoming an ‘only child’ after a while. The surprising thing is that the adults allow this ‘survival of the fittest’ to happen without interfering.

17. Having survived long enough to fledge and leave the nest, the youngsters still have their work cut out for them. They are not born with the skills and knowledge of the adults, and the problems involved in gaining both, especially in times of bad weather or low food availability, mean that only around half of the eagle chicks that leave the nest, reach their first birthday.

F) Eagle Facts – Eagles and Us 18. Eagles sometimes turn up in religions. The Hindus have a lesser divinity called Garuda who has the body of a strong man wearing a crown and an eagle’s beak and wings; the ancient Peruvian people of Moche worshiped them, this is according to the depictions in their art. It is also Zeus’ patron animal in Greek Classical Myths, and a form he has been known to adopt.

19. In North America, the Native Americans use eagle feathers in their spiritual and religious lives. Although it is now illegal to even possess this unless the person who has them is of provable Native American ancestry and part of a federally recognized tribe; In Canada, the booming US market for eagle feathers means there is a lot of poaching and it has resulted in people being arrested for it.

20. No less than 25 countries currently have eagles depicted in their coats of arms. From Albania and Austria to the Yemen and Zambia, there are several other instances of countries which have linked their official identity to the Eagles. While you will find this creature on the US Great Seal, it is the national bird of Germany, Austria, Mexico, and Kazakhstan.