As the Diamond Jubilee celebrations continue, we bring you some of the most fantastic photos from Ghana’s 60th Independence Day…

Ghana celebrated her 60th Independence Anniversary on the 6th of March, 2017; having obtained independence from the British colonial rule on 6th March, 1957. The landmark ceremony was officially celebrated at the Black Star Square, otherwise known as the Independence Square.

Characterizing the celebrations were the traditional march-past by school children, security personnel and other groups, including the head potters popularly known as ‘Kayayei’. There were also several interesting cultural and acrobatic displays from different groups.

President Nana Akufo-Addo inspected the parade as well as took the national salute. He also delivered the 60th Independence Address and lighted the legendary perpetual flame from which the [email protected] torch was also lighted.

In attendance were thousands of ordinary Ghanaians who filled the venue to the brim, as well as distinguished guests both from within and without the country. Among the dignitaries were both past and present Ghanaian leaders as well as those of neighboring African countries.

Below are some of the most beautiful and very fascinating photos captured from Ghana’s 60th Independence Day celebration. Feast your eyes… Known for being the venue for special events as such, the Ghana Black square is also significant on this special day. The stadium which is also known as the Independence Square was filled to capacity as citizens and well-wishers converge to mark the day.

The Independence square built for Ghana’s Independence Day parades which fall on the 6th of March every year was commissioned by the country’s first president, Dr. Kwame Nkrumah. The square, for the 60th independence day, was beautified with red, gold, and green horizontal stripes and a five-pointed black star in the center of the gold stripe. Security personnel such as the Police and the army had their usual march-past and parades. School children also actively participated in the event. The parades were held simultaneously while President Nana Akufo-Addo, Ghana’s 12th president since independence, takes the national salute. Lighting of the Perpetual Flame President Nana Afuko-Addo lights the Perpetual Flame. Lighting the Perpetual flame also serve as a reminder of the commitment to a common goal, such as international peace. The flame lighting also symbolizes the togetherness of the Ghanaian people expected to work in harmony towards building a better nation through patriotism and national unity.

One interesting thing about lighting the Perpetual flame is that once the flame is lighted, a torch would also be lit using the flame. This torch will then embark on a relay throughout the whole cities of Ghana. As one of the key activities of the celebration, the torch is expected to return to its starting point on March 6, 2018, which is the country’s next Independence celebration. Zimbabwean President Robert Mugabe was among the dignitaries who attended the event.

Ghana’s former head of state, Jerry Rawlings, and his wife, Mahama sporting the [email protected] cloth! Jerry John Rawlings served the Republic of Ghana during the military era. He took power during military coups in 1979 and 1981. 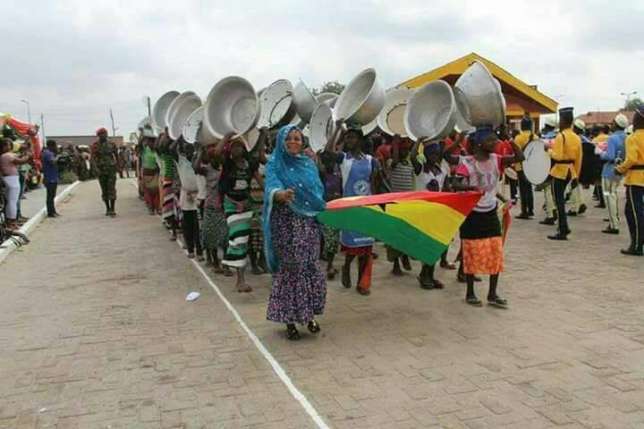 Kayayei refused to be left out in the remarkable celebration. The Kayayei in Agbogboloshie, Ghana, are young women who are known to carry goods and wares for a fee. They are often referred to as the female porters. Notable community heads and traditional leaders prayed for Ghana. Among other things, they asked for peace and progress of the country.

Traditional Ghanaian attires such as the kente dresses, the Ghanaian smock, and the Gonja cloths were also on display at the Independence stadium. Foreign communities identifying with the nation on her 60th anniversary. Tourists from all walks of life converge at the Black Star stadium to commemorate the day. History has it that after Ghana gained independence, her first president proclaimed that he would be abolishing poverty, ignorance, and disease. Six decades later, the country is still troubled by those factors.